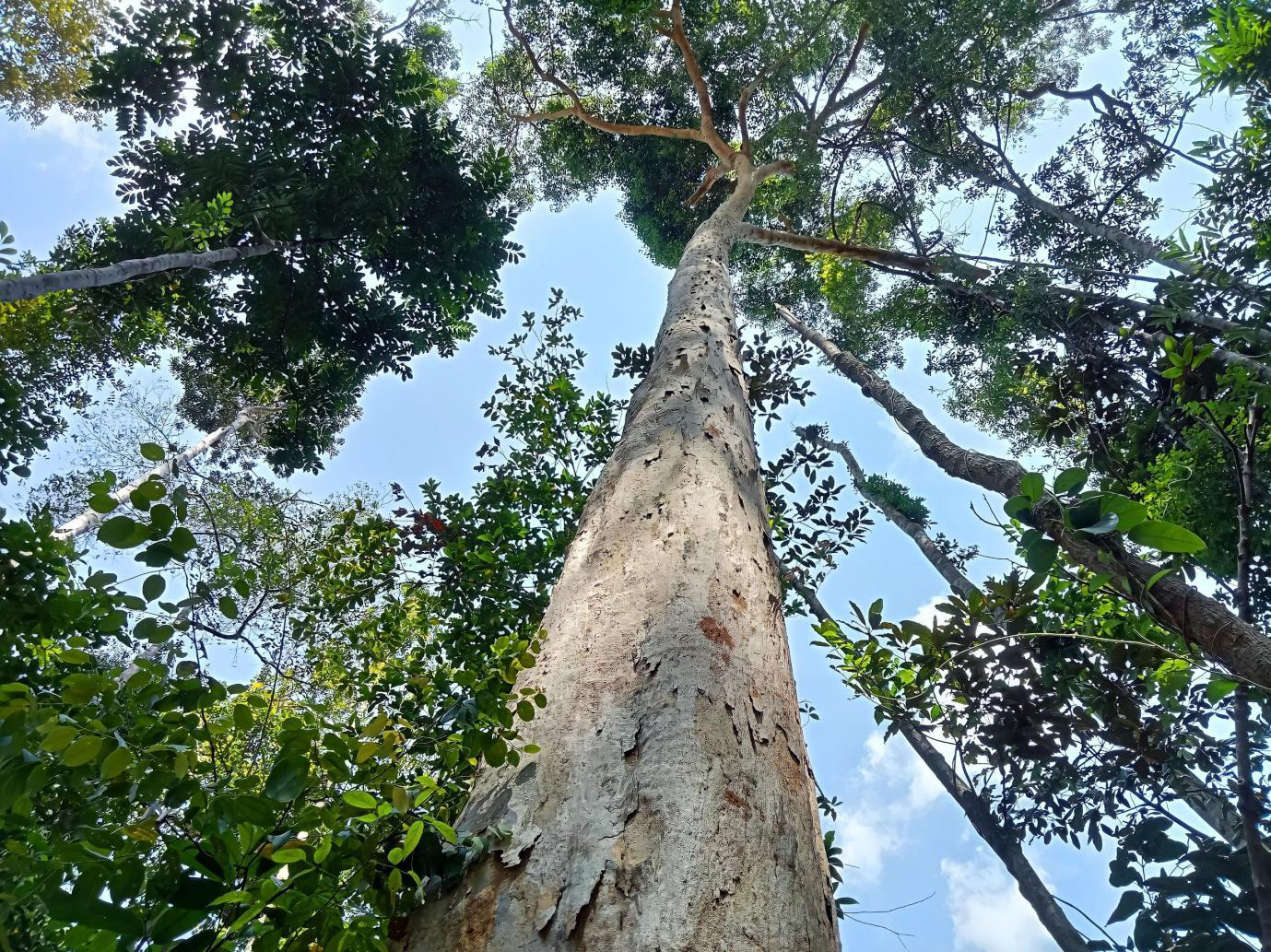 A Story from Anak Talang: Don't Let This Be the Last Tree

I often reminisce about my childhood, when I frequently played in a river or breathed the fresh air of a forest full of towering trees. Back then, I didn't have to bother bringing drinking water as I could just go to the river when I was thirsty. But now, the forest is hot, the river water no longer flows, and no animals roam free in the forest. Lush hills have turned barren - even one of them is called the Hill of Skulls.

I fill my days with farming activities, whether working my family's fields or the communal lands, which are managed together with other community members. In 2019, we were granted a hectare of land by an inheritor from the Indigenous community of Talang Jerinjing. We were entrusted with the task of growing rice and vegetables on that land. We then asked the Indigenous youths to carry out farming practices in line with the ancestral wisdom. This subsequently paved the way for us to develop a collective economy and strengthen the culture of gotong royong (mutual cooperation) among the Indigenous youths.

In 2020, we also worked together to farm on a four-hectare land granted by Nenek Mamak and Datuk Muslimin, our Indigenous leaders. This was done to ensure sufficient food supply during the Covid-19 pandemic. We started by sowing 1,000 banana seeds. Caring for banana plants is relatively easy and the fruits are easier to sell compared to others. Hence, this has enabled us to strengthen our economy and support the Indigenous youths' movement to protect the customary area.

The Indigenous community of Anak Talang believes in the adage, "Ayam tagas benteng aduan, kalau duduk menajam rajau, kalau togak maninjau jarak.” The community's leader has the title of dubalang. Members of the Talang Mamak Tribe call it "Anak Talang Dubalang", which means a brave and tough person. The tough personality of the Anak Talang leader is related to the headman's role in Talang Mamak's leadership structure.

According to Anak Talang Dubalang Datuk Muslimin, the Indigenous Peoples of Anak Talang have many philosophies, including ones related to determining boundaries of the customary area as well as daily living (specifically farming). 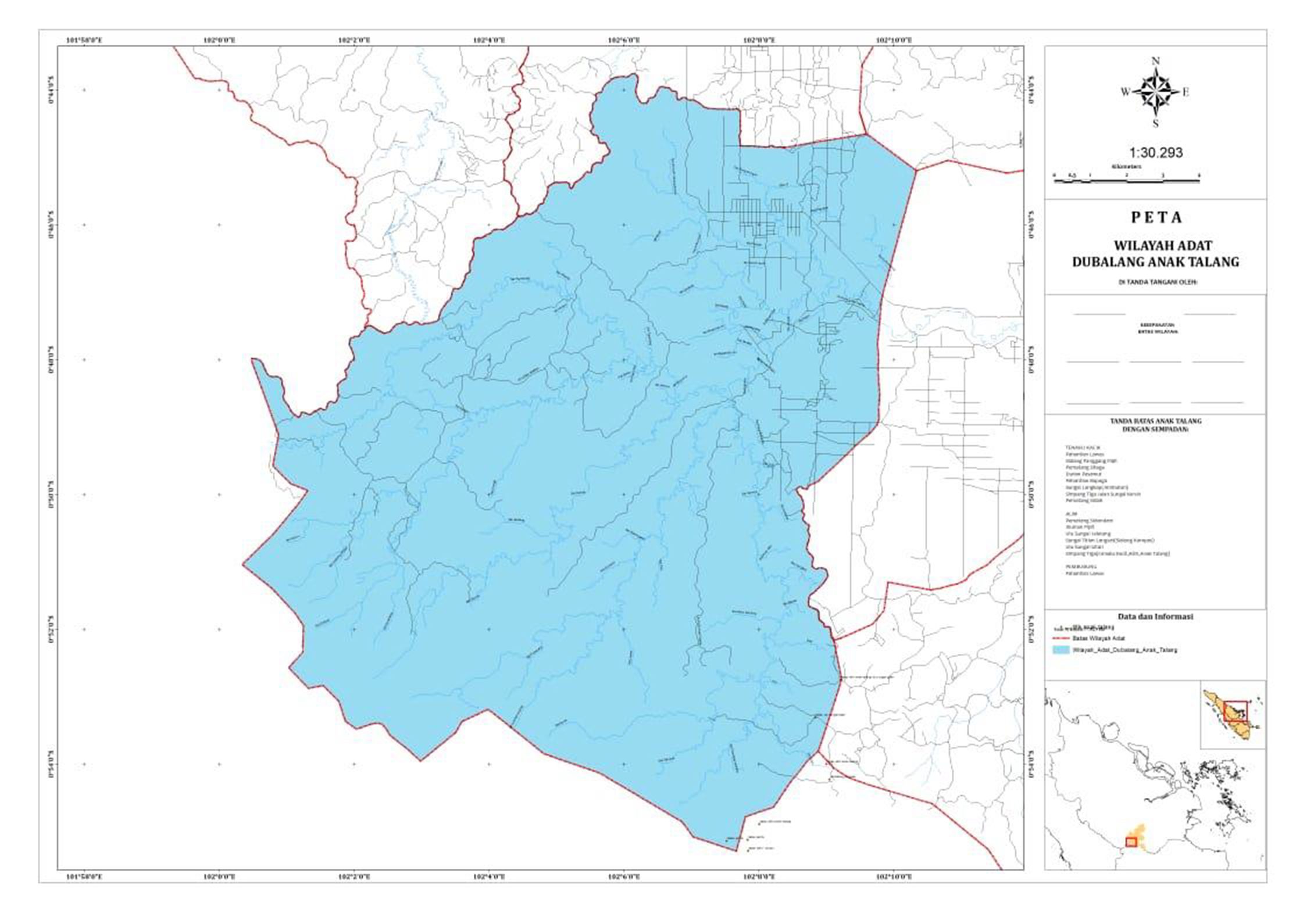 The first stage in our farming process is called singkil kalo kalo, in which we usually attach a tree branch with thumb-sized twigs to an unbroken branch to indicate to others that farming will take place there. Afterward, we hold a ritual to notify the spirits around the area in hopes that we can carry out smooth farming activities. If the spirits forbade us to farm, there would be supernatural disturbances. For instance, a cemetery-like smell would suddenly appear, or the crops would fail to grow. If there's no disturbance for about three days, we can continue to the next stage.

Next, we determine the boundaries of the fields, chop wood, cut tree roots, and cut down trees using a pickaxe, ax, or machete.

After three months, we will create a landang or a kind of firebreak to prevent the spread of fire and hold a ritual involving sesajen or offerings. The ritual, called Merabun Langit Memolas Bumi, is intended to notify all the spirits and animals around, including ants and bugs, about the plan to burn the field area so that they can move away for a while.

A few days after the burning procedure, people with a deep knowledge of paddy will carry out the so-called Menurun Bonih ritual before we collectively sow the paddy seeds. Three months after that, we will hold another ritual called Lengkiso to protect the paddy field from pest attacks. This is crucial as pest attacks can result in unfilled or empty grains.

During harvest season (locally known as menuai), a day before we collect the mature rice crop from the field, we usually install salak stalks, thorns, and bamboos at the corners of the field to ensure that it is free of pests and supernatural disturbances. 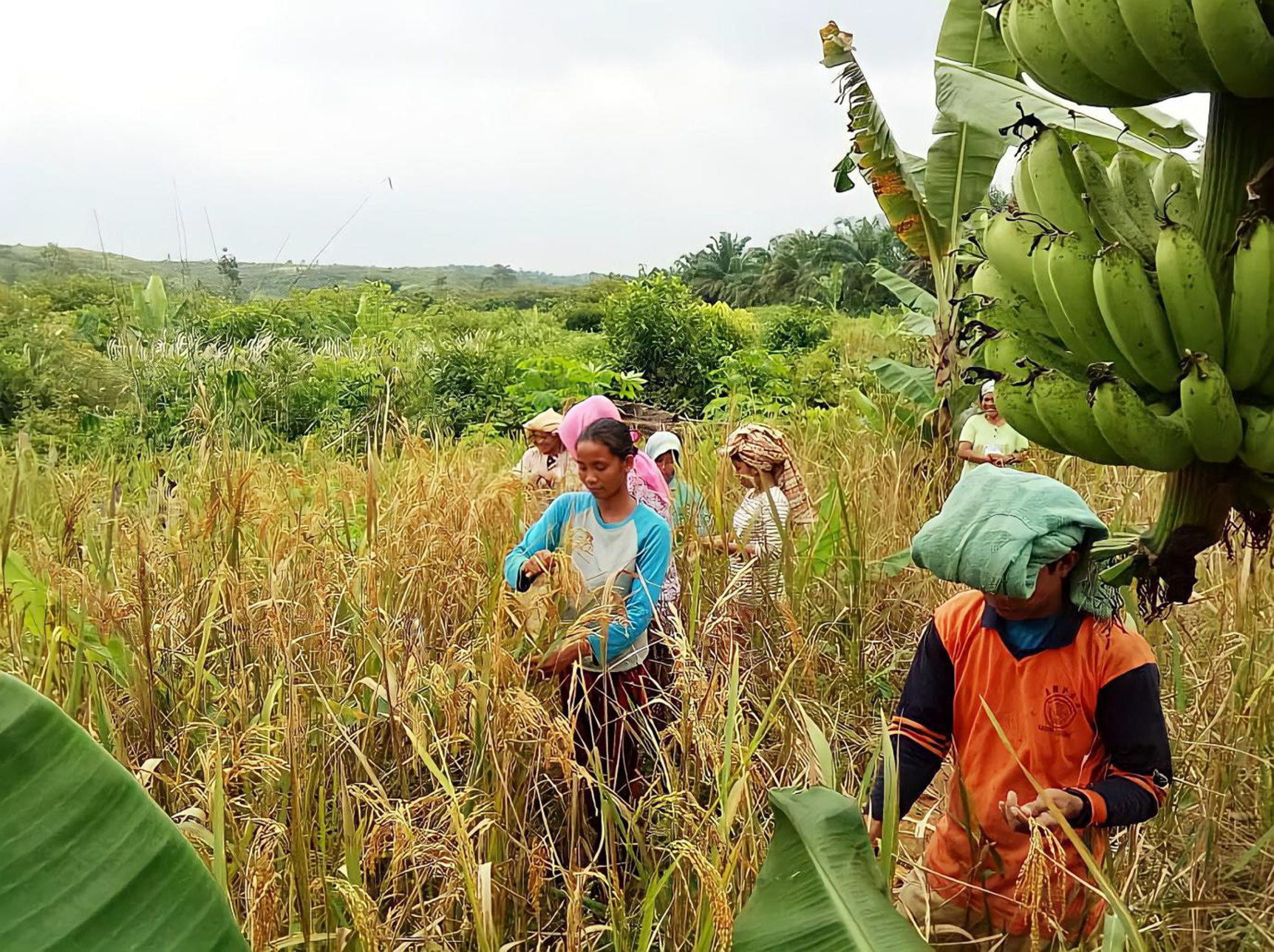 Those tasked with collecting paddy stalks for the first time must wear nice clothes (clean and new), a long cloth, and a peci or Muslim cap. They must carry the collected paddy stalks to their houses. A day after that, one person must repeat the activity. This is called menuai pengiring. Afterward, we separate the paddy grain from the rest of the cut crop, before eventually cooking and eating it. In the past, the threshing was done manually, but now we already use threshing machines. After we eat the "flowers of the paddy", we will start collectively harvesting the rice in a ritual called menyangga.

Menyangga, which has been carried out since the time of our ancestors, comprises two parts. The first one, known as menyangga ikuk taun kepalo taun, is done to prevent the people from contracting seasonal diseases or being attacked by beasts, and to bring peace to the village. Meanwhile, the second one is carried out when someone is sick. As the old saying goes, sakit barubat, domom nak bauras, poning nak bapupuk. The ritual of menyangga should never go away. Once it ceases to exist, the tradition of Anak Talang will suffer the same fate.

In the next step, we give a betel leaf tool to the senior figure in the community (Datuk Dubalang). Then, tuo longkop, or the one taking care of the ritual equipment, gives instructions to prepare roast chicken, yellow rice, chicken blood, container made of banana leaves for the offerings, several types of flowers, various cakes, sugar palm shoots, lengkonai plants, bamboos, wood, rattan, coconuts, sticky rice, candles, chicken eggs, basil leaves, incense, and lemang (traditional food made from glutinous rice, coconut milk, and salt).

We annually arrange a big party called Gawai Gedang, during which 29 communities of the Talang Mamak Tribe usually hold various events, such as cockfighting and weddings.

The time for us, the Indigenous Peoples, to rise is when we start thinking about our fate; about our rights to the customary area and how we can preserve our culture, which is now threatened by rapid development.

Forest is our lungs and homeland. But now, there's only a little bit of forest left. The Indigenous Peoples have maintained a close relationship with nature. However, our tribe is at risk of going extinct because some of our customary areas have been grabbed by palm oil plantation companies. Today, the Indigenous youths are making every effort to protect the forest, to maintain the integrity of nature.

"Forests have gone as they have been sold, and the companies have encroached on the forests," said Aan Pardinata, a friend of mine who's also an Indigenous youth. 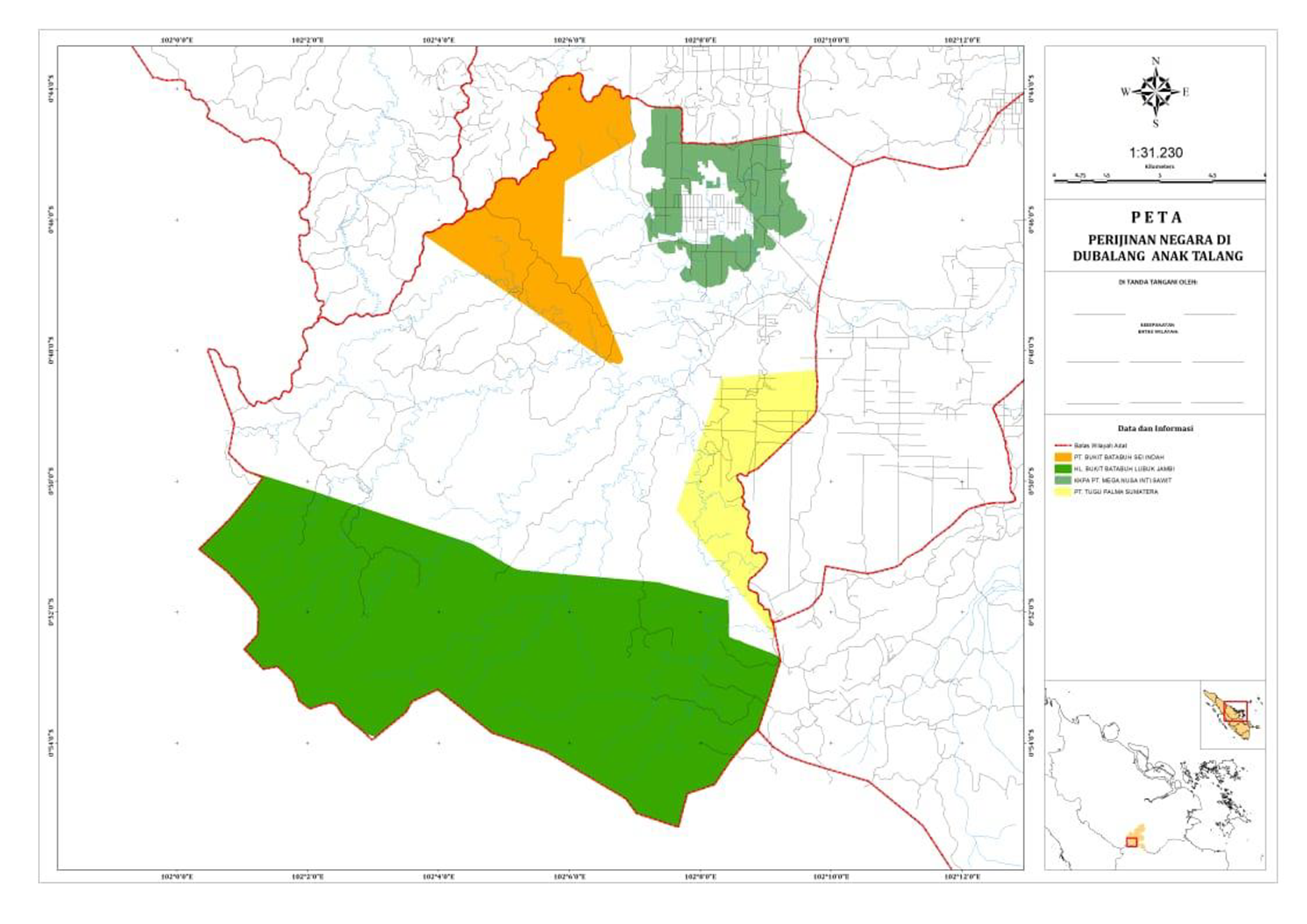 Collective efforts made by Indigenous youths to protect the forest include conducting a patrol throughout our customary forest. Those involved in the patrol team are called the Nine Young Guardians of the Forest. With strong determination, I, along with Darsen, Aan Pardinata, Seki, Joni, Bujang Hadi, Alri, Dedi Asmar, and Edi, initiated the forest patrol in 2014 after being inspired by the tale of nine young men told by senior members of the Talang Mamak Tribe.

We regularly conduct a patrol throughout the forest, which measures 23,000 hectares, to ensure that there's no illegal logging. The patrol takes place from 8 a.m. to 4 p.m. We then take a break, before repeating the activity the next day. We do this twice a month.

"[The purpose is] to ensure that the future generations will still be able to see the Anak Talang's Indigenous Forest," said my friend Aan. As Indigenous youths, Bende and friends are determined to do something to save the forest. In keeping with this spirit, we have started making the required efforts.

We often face threats of violence, whether from military personnel or big companies. The most memorable incident is when we had to stop two bulldozers of PT Runggu Prima Jaya, which operated in Anak Talang Village in 2016. The Indigenous Peoples refused to let the company operate as it harvested timber in the customary forest without a permit. In addition, the company was also found to damage the spring that had been relied on by thousands of Talang Mamak Tribe members as the place to wash, bathe, and drink.

There has certainly been fear. Once, we received death threats and got hunted into villages.

"When we secured the bulldozers that were harming our forest, I was scared because there were threats from the company. That's the first time for us to get into a direct confrontation with the company that was damaging our forest. I and Supriadi left our village for months because of the company's intimidation. Even today, I still remember it clearly," said Aan.

Mother Earth as Our School

In addition to conducting a patrol, the indigenous youths have also tried to preserve the history by tracing the ancestors through discussions with the elders or visits to various meaningful sites. We eventually wrote down what we had learned and published a book titled Anak Talang Dubalang. 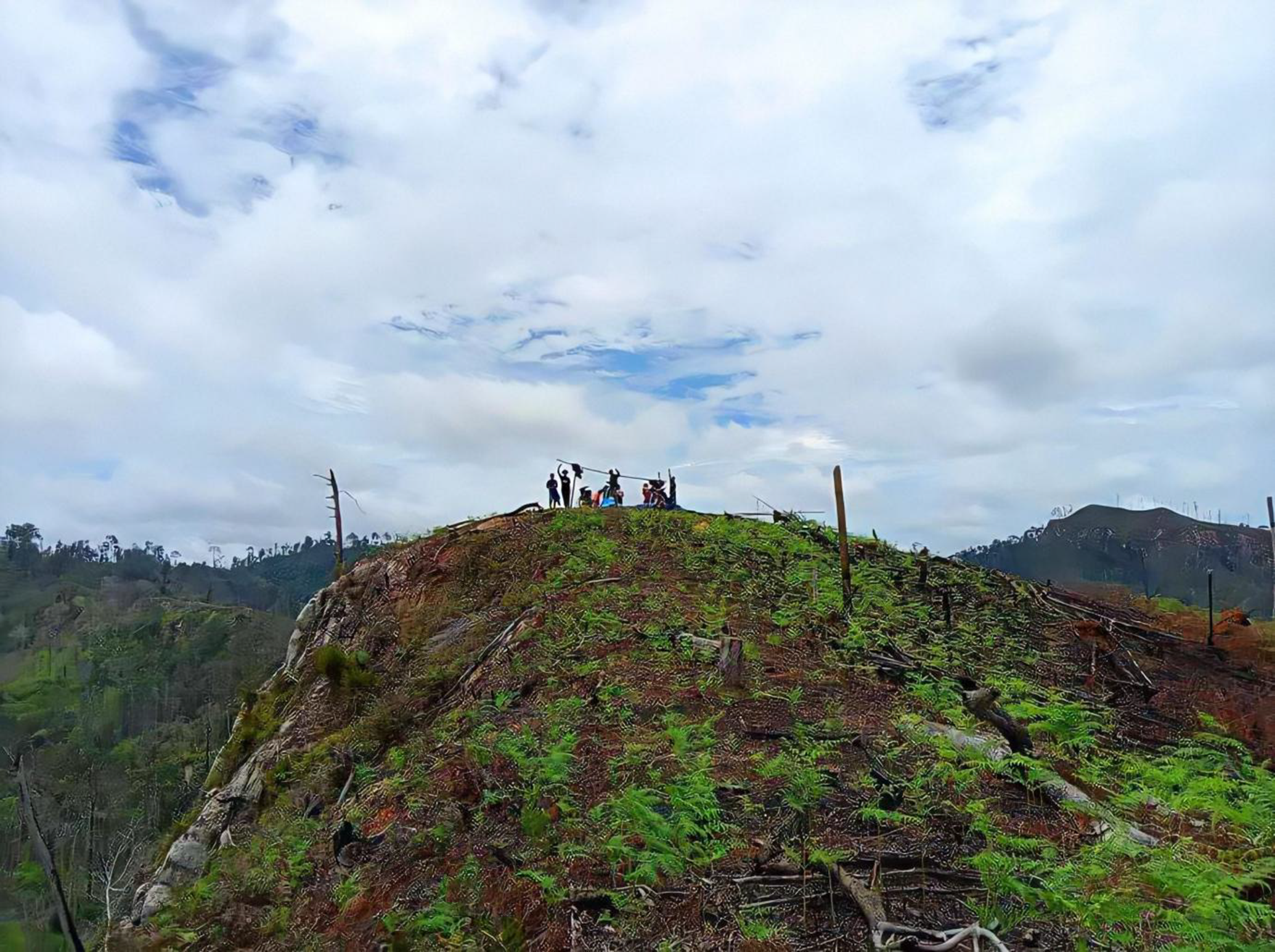 Part of the customary area.

"Nowadays, there are not many Indigenous youths who care or have an interest in the history of their own villages. Hence, I started exploring history and throwing questions at the elders. Otherwise, the history would be lost," said Eti Lestari, an Indigenous youth.

Eti is one of the Indigenous women who have been actively involved in the movement to preserve history. It all started when a group of Talang Mamak's Indigenous youths paid a visit to historical places such as sacred tombs and forests. What was originally a curiosity then turned into a fighting spirit, which has remained strong despite the many challenges faced during the visits, whether those related to the distance or weather.

Today, Eti said, Indigenous women have been involved in every village meeting. Eti wishes her village can get back to where it used to be; where dense forests and clean rivers are easy to find. She has always been hoping that Indigenous youths in the village would unite to defend their village and explore their history.

We see there's an opportunity amid the Covid-19 pandemic to preserve memories of planting herbs and concocting traditional medicine. In the beginning of the pandemic, we were busy growing herbs on lands granted by the elders. We gathered information from the elders and then collected herbs to concoct traditional medicine. Afterward, we started boiling the herbs in a large pot, before storing the boiled water, which can strengthen our immunity and help heal sores or wounds. The Indigenous Peoples of Anak Talang have other wisdoms related to medication, including those presented in the rituals of menyangga and badukun togak.

Anak Talang Dubalang Datuk Muslimin said, "What they [the Indigenous youths] are doing is part of what we did in the past. More or less, that's the meaning of the saying: Orang tua bak napuh di ujung tanjong, ilang sikuk berganti sikuk."

The Indigenous Peoples of Talang Mamak, including the Indigenous youths, are committed to keeping the fight going. We emphasize, "We won't let this be the last tree."

The commitment is for all trees, for everything in Talang Mamak's customary forest.

The writer is an Indigenous youth from the Indigenous community of Anak Talang in Indragiri Hulu, Riau Province. This article is part of stories written for Kisah dari Kampung (Stories from Villages) - a book writing movement initiated by AMAN to present profiles from various villages across the archipelago. The stories are written together by AMAN cadres and journalists. 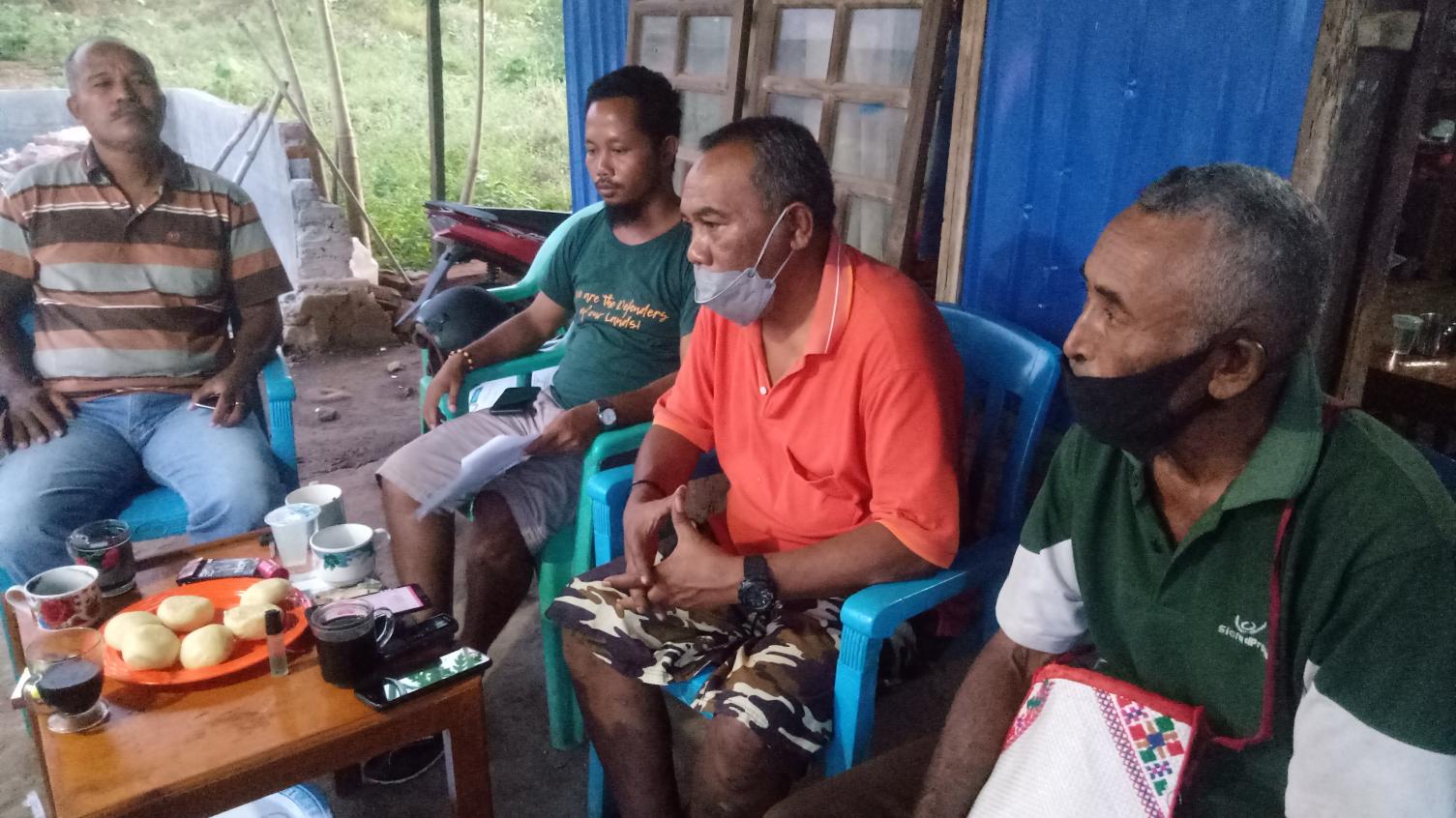 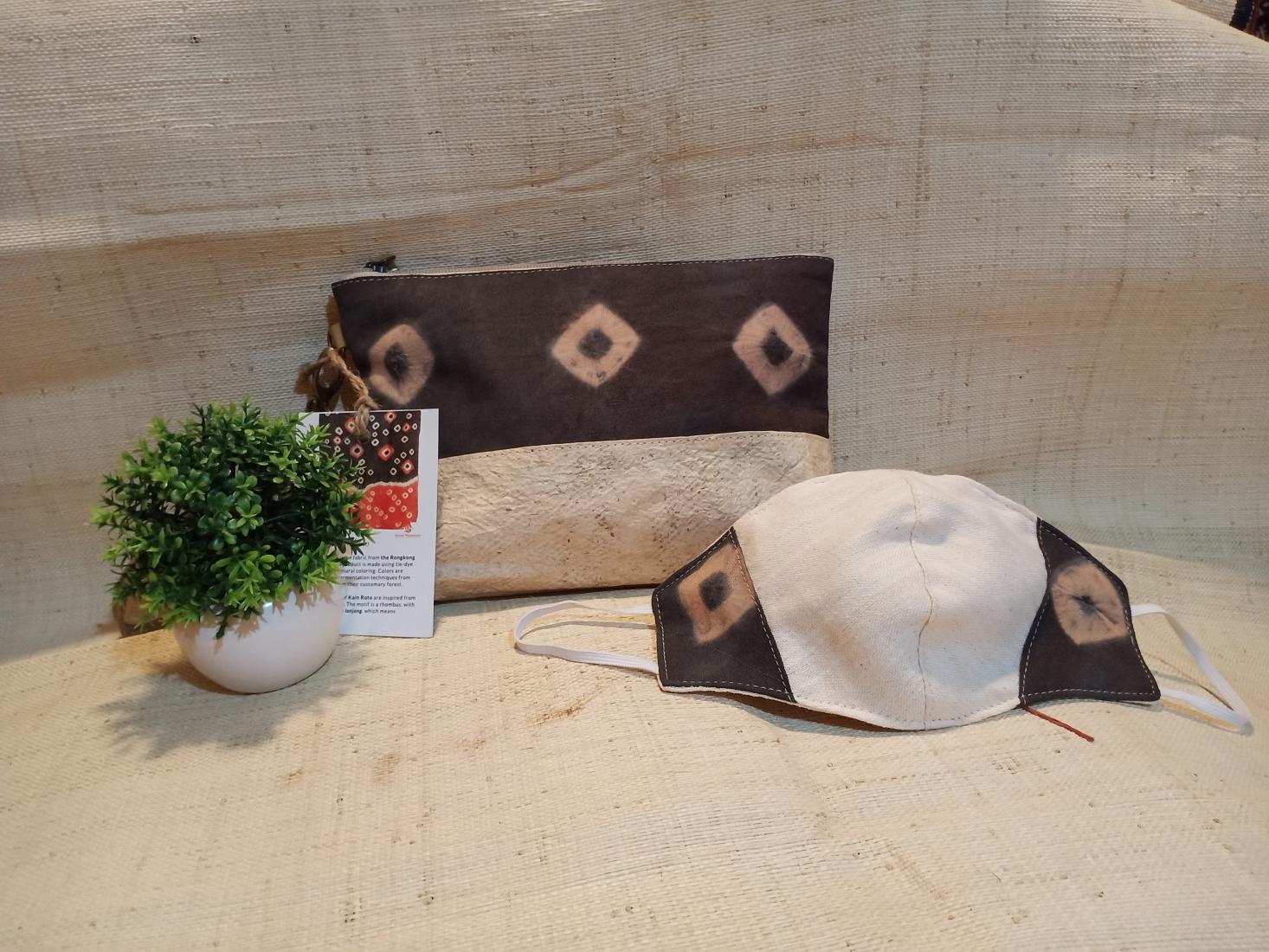 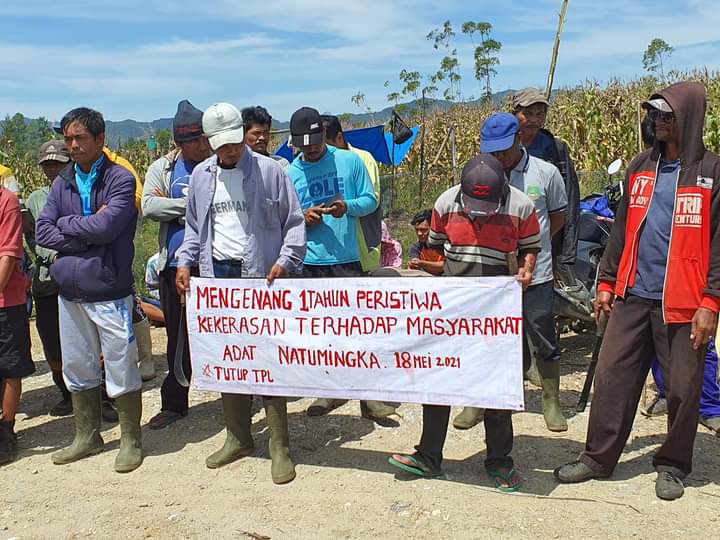 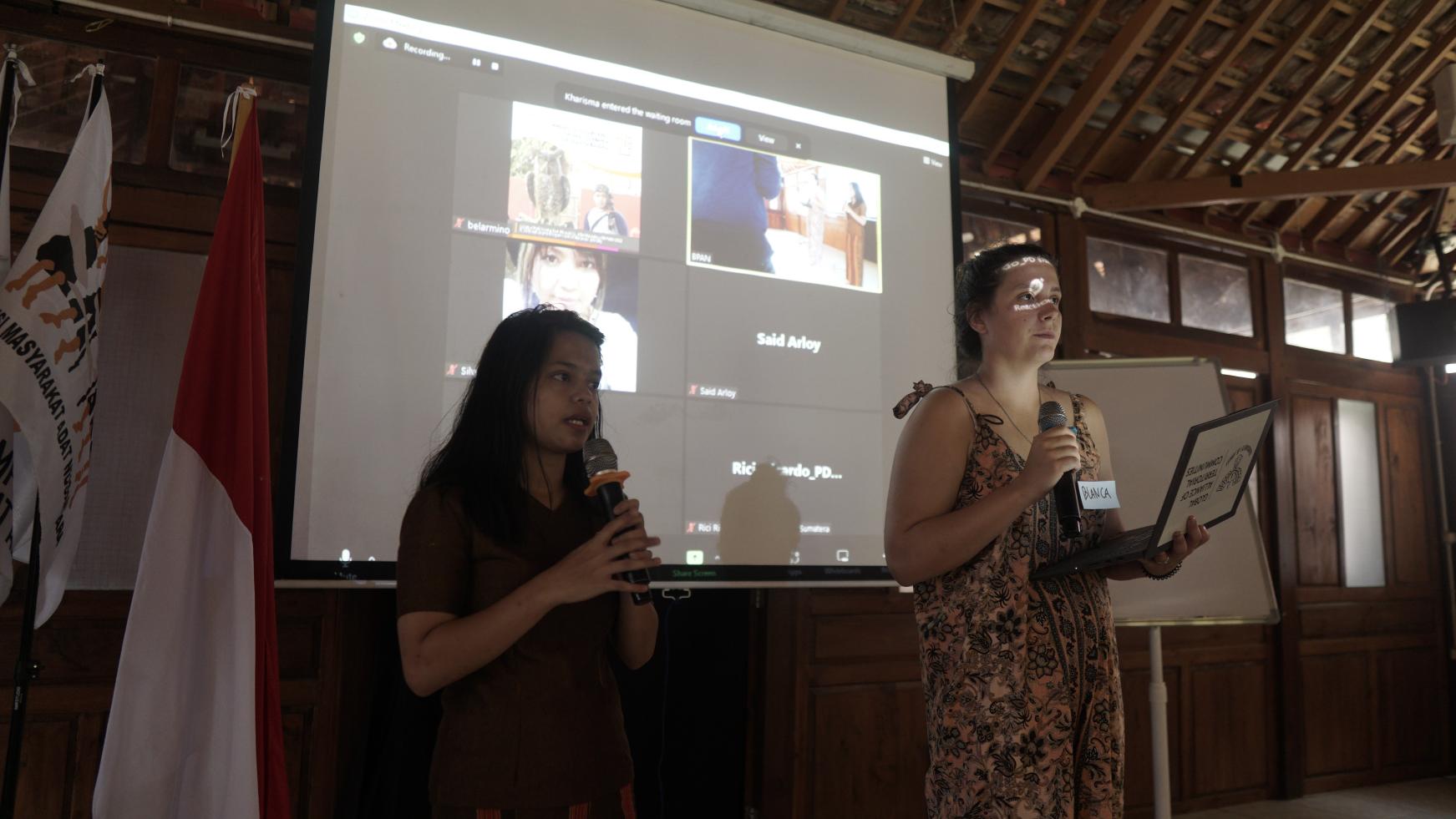